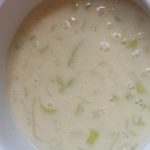 This is actually a low fat soup that I used to eat when I was on a diet (one of many occasions!) I have adapted it so that toddlers get all of the good fats they need. This soup can be made so thick (by adding a little more cornflour and then blending 3/4 of the soup) that it can be great for toddlers to dip in toast or bread soldiers instead of using a spoon.

• Put the leeks and potato into a saucepan with the hot stock, cover and simmer for 10 mins
• In a small bowl, blend the milk and cornflour (add a little more cornflour if you want a thicker soup)
• Add the milk mixture to the potato and leeks, stirring until the mixture thickens
• Cover and simmer for 10 mins
• Stir in the mustard and pepper, and serve, OR
• Blend ¾ of the soup, leaving the remaining ¼ “chunky” before serving for a thicker soup

For an even creamier consistency, stir in a tablespoon of full fat plain Greek yogurt just before you take it off the heat.

You can add 150g chopped ham or cooked chicken breast to the soup for a non-vegetarian version.

Let me know what you think by dropping me an email.